Carol is away. And guess who is privileged enough to take care of her itty-bitty, cuddly-wuddly Yorkie, Fred? Me! And my dear hubby, too. We’ve been having such a blast with this fur-ball! On Friday we took him to a cookout where he saw his long-lost friend, Boulder. Everyone raved about how cute Fred was, “he’s so endearing!” and “I don’t even like small dogs, but this little guy is so fun and adorable!”

On Saturday, we took him to another cookout with Brent’s family. 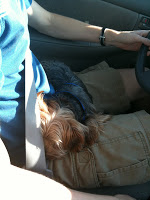 He hung out with Brent’s twin cousins, Brooke and Bridget. 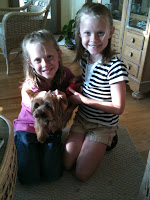 And became the surrogate pet of the band, TelluRide. Brent’s uncle, Jeff Catton, is their manager and they are in Minnesota playing some tunes. They’re extremely nice guys who played baseball in the park with the cousins and roasted marshmallows outside with us. Check out the band: http://www.myspace.com/tellurideband

Band member, Jimmy, became a huge Fred fan. He carried him around for most the night and threatened to trade Fred for his dog at home! 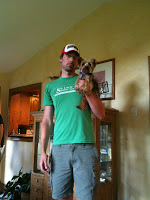 Don’t worry, Carol, we brought him home in one piece. He was quite tuckered out, though. Be warned. You might have to pry him away from Brent’s chest! 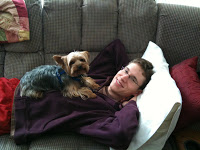