Giving Thanks for Sistas

In this week of giving thanks, I’ve been thinking an awful lot about the blessings of sistas/sisters/sistahs (those fiercely fabulous female friends so many of us count on like food and water). As Anna and I have been collecting stories for our 3rd book in the “Happy …” series, we are indeed focusing on sistas.

This past week we’ve received some downright moving tales. I can’t get one out of my mind so maybe if I share it here I will be released from its grip. Probably not. But here it goes:

A little more than five years ago, a dear friend from college, Catherine, died after an on-again, off-again battle (she called it “inconvenient”) with breast cancer for years. She was 49. Her little boy was 11. It broke our hearts.

Cathe had a way of collecting friends like some people collect coins. She polished all of us and scooped us together in a pile. Lo and behold, we became friends, good friends who gather several times a year to flirt with Italian waiters, eat too much and drink a bunch of wine. Sometimes we top it off with a forbidden cigarette, just because Cathe liked being a bit of a rebel. 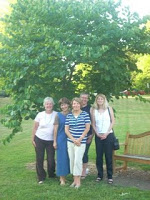 After she died we had a tree planted in her honor on the campus of her alma mater, the College of St. Catherine. Each spring it boasts pink blooms, and a bench now graces the site, too. On July 31, the anniversary of her death, I sat there again, drinking in a kind of silence almost antithetical to Cathe’s nature: She was Irish and never shut up, except sometimes in church, and even then she usually found something to whisper and giggle about.

As I sat there thinking about Cathe, I hoped there is, indeed, the afterlife to which we Christians cling. I have some good gossip I need to tell her and I need to feel again the special kind of exhaustion that endless laughter brings. I need her to tell me a story. I miss her “cackle.”

Suddenly, my reverie was interrupted. Someone walking to his car after a campus summer music conference had burst into a perfect-pitch rendition of “Amazing Grace.” Thanks, Cathe.


NOTE:
If anyone wants to read more from the author of this moving short story, check out Pat’s blog linked in the right column: Madwoman of the Preserve Path. Thanks, Pat, for sharing your sista story of Cathe with us.

AND ONE MORE NOTE:
If you want your sista/sister story included in our forthcoming book, send them in now! We’re in the final stages of writing but can’t pass up a funny, serious or seriously funny story. Send them directly to: [email protected] All identifying information will be changed to protect your identity. Come on. Do tell.