A few evenings ago I did a “What Happy Women Do” talk to a really hip and cool group of women, each connected to a hip and cool health organization in the Twin Cities. The attendees ranged in age from high school (the letter jacket gave it away) to an 85 year old (I learned her age when she volunteered it and some smart advice to all of us during the Q&A). Each woman was there to learn more about the profound connection between her physical and relationship health. 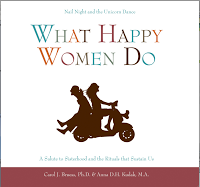 During the fun lecture (fun for me, I mean, to see people nodding, smiling and enjoying the stories of sisterhood, friendship and the importance of fulfilling connections both within and outside of our coupledom), I noticed a woman crying. She was visibly touched, it was clear, by the story I had just read: “Remembering Cathe,” story #6 in What Happy Women Do. I love the story for many reasons, partly because it’s brilliantly written by the woman who shared it; partly because it reminds us to have great friendships and salute them, always; partly because we all can relate to mystery, laughter and loss.

I share it again below to remind all of us happy-couple-readers to make sure we round out our couple-ness with great friendships. Research shows our social networks (not of the digital kind, the actual human kind) do significantly influence our marriages and partnerships.

A little more than five years ago, a dear friend from college, Catherine, died after an on-again, off-again battle (she called it “inconvenient”) with breast cancer for years. She was 49. Her little boy was 11. It broke our hearts.

Cathe had a way of collecting friends like some people collect coins. She polished all of us and scooped us together in a pile. Low and behold, we became friends, good friends who gather several times a year to flirt with Italian waiters, eat too much, and drink a bunch of wine. Sometimes we top it off with a forbidden cigarette, just because Cathe liked being a bit of a rebel.

After she died we had a tree planted in her honor on the campus of her alma mater, the College of St. Catherine. Each spring it boasts pink blooms, and a bench now graces the site, too. On July 31, the anniversary of her death, I sat there again, drinking in a kind of silence almost antithetical to Cathe’s nature: She was Irish and never shut up, except sometimes in church, and even then she usually found something to whisper and giggle about.

As I sat there thinking about Cathe, I hoped there is, indeed, the afterlife to which we Christians cling. I have some good gossip I need to tell her and I need to feel again the special kind of exhaustion that endless laughter brings. I need her to tell me a story. I miss her “cackle.”

Suddenly, my reverie was interrupted. Someone walking to his car after a campus summer music conference had burst into a perfect-pitch rendition of “Amazing Grace.” Thanks, Cathe.