Kate and Pete: Chapter 2 (hint – there might be Love Letters!)

As promised: Chapter 2 of the great-Kate and neat-Pete happy couple 2014 feature!

Here, Kate reveals the very beginnings of the just-keeps-getting-better Kate-Pete story (the part before the can’t-top-it-carnival-celebration). As surely it will in you too, their sweet beginnings inspired in me a big, juicy “awwww” (right after I thought, of course only to myself, which now is not going to be private because I’m saying it without hesitation to thousands of readers: “Hey – I’d sure like to read a few of those saucy letters!” But then I recalled my unwavering commitment to keeping this a PG13 blog. Shucks). Anyway … on to the ever-sweet-and-love-letter-filled-life, chapter 2, of Kate and Pete. Enjoy!

“The Story of Us”
– by Kate Woodman Middlecamp

Whenever Peter and I befriend someone new, it isn’t long before the question is asked of us: “How DID you two meet?!”  To which we invariably reply, with poorly concealed glee: “We actually met online,” and chuckle as the jaws drop. It is, I think, the absolute LAST place people would expect the two of us – with all our crazy loves, quirks and hobbies – to have connected.  In all honesty, it was the last place either of us thought it would happen as well … until it did.

Peter had been on Match.com (this during the Dr. Phil “Mind. Find. Bind.” era of Match) for awhile before I joined.  Working through the end of a very complicated relationship, he was looking for someone worthy of moving on with and had been on a few dates – dates worthy of a few good stories, but not much more.  When I found his profile through a search – we were not, funnily enough, matched by the website automatically – I was taken aback.  Like my own freshly written profile, Peter chose to acknowledge the quirkiness that is online dating with humor and wit; a fake interview with himself, in fact. I read his profile, laughed harder than I had in months, and a little
flutter started in my heart.

I must admit, I thought then (and still do) that he was WAY out of my league, and so, initially I didn’t reach out.  I just waited.  And re-read his profile 20 times a day. For days.  And then got sick of myself and summoned the courage to send him a simple message of gratitude for the laughs.  To my delight, he wrote back almost immediately and the real story of Kate and Pete began.

We exchanged e-letters a few times a week, which quickly progressed to a few times a day.  Letters every bit as witty and funny as the online profiles we had worked so hard to perfect.  And, as we got to know each other better, letters that were sweet, and vulnerable, and yes, even a bit saucy at times. We crafted whimsical and silly stories for each other that illuminated – in a magical way – who we really were, and who we wanted to be, and hinted at who we might become together. I think, even then, we knew somewhere deep down that our stories might be best told as one.

As a married couple, just now a few months past our 4th anniversary, we still use written word as a way to express, celebrate and reconnect.  It is not unusual, after a particularly glorious string of 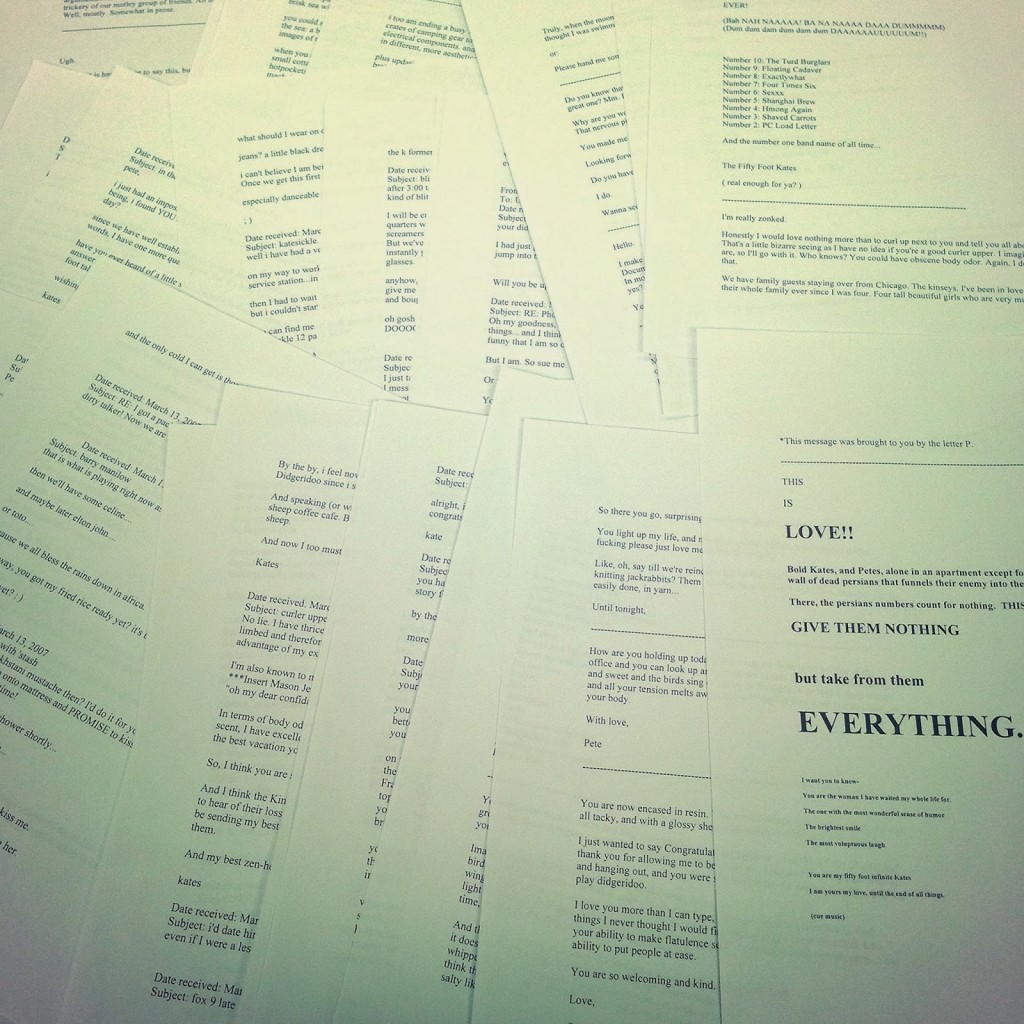 days, for one or both of us to send a silly, gushing love e-letter or text message of gratitude. The same goes for the less glorious times, the times when the real work of marriage takes place, after an argument or in a time of stress.  We return to the written word because it forces us to literally spell out our feelings; to be specific, to be honest, to be loving.  Also, we write because written words “keep” — as physical, visual reminders of our love, our promises, our desires — in a way spoken words do not.  I have copies of our “Top 20” e-letters from when we first met in my inbox, and when re-reading them, it’s ever most clear: Our stories, truly, are best told as one.